The Road Not Taken
Robert Frost

Two roads diverged in a yellow wood,
And sorry I could not travel both
And be one traveler, long I stood
And looked down one as far as I could
To where it bent in the undergrowth;

Then took the other, as just as fair,
And having perhaps the better claim
Because it was grassy and wanted wear,
Though as for that the passing there
Had worn them really about the same,

And both that morning equally lay
In leaves no step had trodden black.
Oh, I marked the first for another day!
Yet knowing how way leads on to way
I doubted if I should ever come back.

I shall be telling this with a sigh
Somewhere ages and ages hence:
Two roads diverged in a wood, and I,
I took the one less traveled by,
And that has made all the difference.
Posted by Graham at 15:58 No comments:

On Queues and Security

I needed to get my passport renewed in a rush the other week, so after some reearch I decided to go up to Victoria and apply in person.  This was surprisingly easy to organise, despite the fact that the Web site said it was hard to get an appointment at this time of year.

It's a new building, bigger and swisher than the old place I half-remember on Petty France.  And they take security, and flow of applicants, very seriously.  High security screening on the way in, then you queue to confirm what documents you have and get a ticket - a bit like the deli counter at Sainsbury's - for the queue you should go to.  Then from that queue, (which when I joined to it seemed to be a point at which a number of other routes through the system merged, so there were different ranges of ticket numbers), I went to a cubicle to present my documents.

So the woman took all the documents, gave me another chit, and directed me to the Photo-Me booth where for a fiver I acquired some more (better, I guess) photographs.  Then I went downstairs again to the first queue to get a ticket so that I could queue again.  This time I was clearly on a different pathway (rephotography, I guess, or some such), as I got a number from a different series and I queued for less time.  And saw a chap in a different cubicle who could still (successfully! Hurrah! I had been getting nervous) find my documents, check and add in my photos, and then give me a ticket for another queue.

Where I went, and queued, and eventually paid.

And got another chit with a number I could use to track the eventual delivery of my new passport.

Now, you may say that all of this queueing is actually more efficient (it probably is), and it is certainly very British.  And there are lots of uniformed chaps and chapesses making sure the queues are neat and tidy and don't go off in the wrong direction and marginally impede another applicant heading for a different queue.  Overall, though, the impression from all of those uniforms and all that ordered waiting, is one of serious security management.  And this is continued after the visit.

Because I wan't in when the secure courier first tried to deliver the passport (for which you are required to have several other forms of identification handy to satisfy the courier that you are the person you claim to be), I had to schedule a further visit.  The service which manages this requires a long PIN and some other details.  So I rang them up (more queueing), only to find an automated system including a voice recognition tool that didn't. The Web site isn't great, and doesn't send confirmation of the fact that you've successfully re-booked - at least not that quickly.  So I struggled.

Eventually I outwitted the automated phone system and found a route through to a human (or I guess a far better automated system, but I think not).  Of course there was a queue for him, but he was very helpful - once he'd taken me though all the security to confirm that I was me.

So with the day arranged, and me working from home, the courier arrived.

On a low-spec motor scooter with L plates.  And he asked for a signature, but no documents.  It was as tho' they'd decided that for the last mile of the journey my serious, secure, much-queued-for passport could be entrusted to the local Pizza delivery boy, as he was going that way anyway.   Rather sweet, really.

Still, it worked, so I can't complain.

Have a look at this.  Play with it.
It's a super-duper, interactive Web Periodic Table
Posted by Graham at 14:24 No comments:

So.
And so.
I stand by what I wrote about the horrid Murdochs  in 2009.  They are unfit, completely unfit, to own any media whatsoever.  Period.
(Just thought I'd put my oar in again).
Posted by Graham at 21:41 No comments:

Porlock! thy verdant vale so fair to sight,
Thy lofty hills which fern and furze imbrown,
The waters that roll musically down
Thy woody glens, the traveller with delight
Recalls to memory, and the channel grey
Circling its surges in thy level bay.
Porlock! I shall forget thee not,
Here by the unwelcome summer rain confined;
But often shall hereafter call to mind
How here, a patient prisoner, 'twas my lot
To wear the lonely, lingering close of day,
Making my sonnet by the alehouse fire,
Whilst Idleness and Solitude inspire
Dull rhymes to pass the duller hours away.
Posted by Graham at 21:49 No comments:

Well that was worthwhile. As I mentioned last week, John Graham (Araucaria) was this week's Desert Island Castaway.

The show was never going to give great insights into crosswords, particularly as young Kirsty doesn't do then herself - or so she claimed - and put herself in the role of the naive (ignorant) enquirer.  Probably something about standing in as the listener's representative, to get an explnation for the intelligent novice.  Or some such.  Either way, when explaining that "Altered sets in North? O don't I care! (11)" meant Orthodontic, the enjoyable misdirection in 'altered sets' wasn't mentioned.  The Jeffrey Archer uber-anagram was wheeled out again (John Graham sighed) - but I enjoyed hearing his favourite clue was "Go to the country? Let Green Line coach drop off companion. (7, 8)"  (**)

Most of his music was choral, classical.  But there was some Procul Harem (B side of "Stairway to Heaven") from the days when he was the chaplain to Reading University.

And it was interesting to be told about his first ministry - St John's East Dulwich.  Which apparently in those days expected its priests to be celibate, so when he fell in love with a member of the congregation,he was moved a long way away (to Durham).

Although enjoyable, there was a sense that they only really touched upon some subjects - and others (like his politics) weren't mentioned at all.  But that may be a failure of the format.

But next week will be Michael McIntyre - and I won't be listening...

I've acquired a small and only slightly damaging Amazon habit, and recently bought Queen's "A Night At The Opera" - mostly for Bohemian Rhapsody.

Graham James, Bishop of Norwich got Archimedes' Principle completely wrong on Thought for Today this morning.  Quite annoying...
Posted by Graham at 23:17 No comments:

So, the boy playing the Artful Dodger in the original West End run of Oliver! bunked off, and this fresh-faced chap took over at short notice: 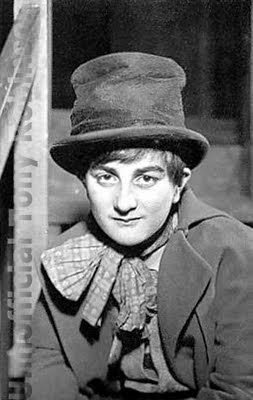 After just a moment, it is possible to see who this is.  You can recognise the young Tony Robinson - Baldrick in Blackadder.  And of course, the presenter of Time Team, the Worst Jobs in History and (urghh) Codex.

He's been recognised by several institutions who've awarded him honorary degrees, he's president of the Young Archeologist's Club, has been a vice-President of Equity, and he was on the Labour NEC from 2000 to 2004.

Although he has no Honours Young Tony has also just been recognised by Radio 4 - he got to pick his Desert Island Discs on Saturday.  Hurrah!

The next question is, can you recognise this man?

He has been recognised with an MBE, and is the subject, it appears, of next week's Desert Island Discs:

Quite so.  It is John Galbraith Graham, ex C of E priest, briefly chaplain and tutor at St Chad's, Durham,  cruciverbalist extraordinaire and,  indeed, Araucaria of The Guardian.  He remains leftwing, and, it appears,  will never work for a Murdoch paper.